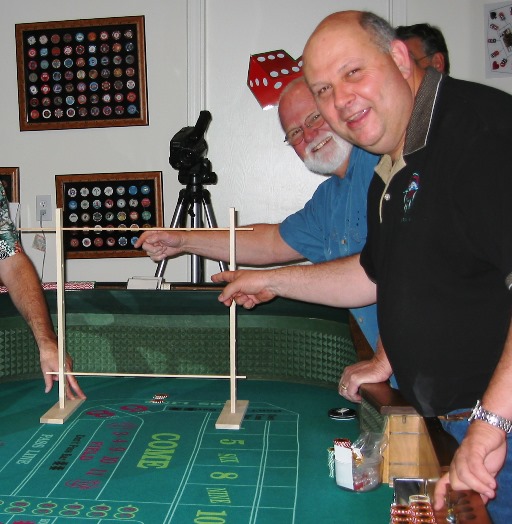 Crapsfest is an annual event originally conceived of and promoted by Steve “Heavy” Haltom in 2004.  The idea was simple.  To bring together some of the top experts on casino craps for a day of player training, roundtable discussions, and live practice – followed by a weekend of live casino play for all.  On the agenda for that first seminar were:

Michael “The Professor” Vernon – founder and owner of Playing4Keeps.com and member of the Dice Busters coaching team.

Steve “Heavy” Haltom – developer of the Axis Power Craps method of dice control and founder of this website and axispowercraps.com

Over forty players signed on for the weekend’s events.

The first session kicked off on Friday afternoon at 1:00PM.  Heavy  took charge and reprised his infamous “Crapshooter’s Buffet” presentation, then went on to cover the general “theory” of dice control.  Covering this on Friday freed up additional time for toss training on Saturday monring at Dice Coach’s craps pit – which was a great use of time considering the size of the class.

Soft Touch followed Heavy with a discussion of the female edge at casino craps. She did a great job of explaining the differences in how women and men approach the game of craps. One of the highlights of her talk was related directly to WHY we play the game. Do you play because you want to throw the dice, or do you play because you want to win the casino’s money? Focusing on that may lead you to change your approach to the game.

Irishsetter related the story of how he got started on precision shooting with an experiment on on-axis rolling in his garage, then touched on the ground-breaking work that is going on at dicesetter.com on the next generation of dice influencing.  By the way, we put all of that research to the test over the weekend – proving conclusively the power of the parlay when utilizing certain dice pre-sets on the Come Out.

Pablo covered the importance of practice – and tracking results – for fun and profit, then shared his experiences in playing the comps game to win in Vegas.

Dice Coach told us how a retired public works construction company owner ended up selling his “boat” and moving to Las Vegas to gamble full time in “Living Large in Las Vegas.” Those who attended this weekend learned just what it takes to survive 24/7/365 in sin city.

Last but not least, Michael Vernon wrapped it all up with the Craps-Mind connection, focusing on energy and intuitive craps play.

There were some big winners at the casino over the weekend as well. Dutch turned ten bucks into a nice four-figure win after holding the dice between forty-five minutes to an hour at Fitzgerald’s. Maddog and Irish slipped out of town to play in Jean, Nevada and managed to lock up big wins on horn prop action. And Sunday afternoon, almost everyone won as Betsey held the dice through two stick changes at the Cannery, while Dice Coach held the dice for over a half hour on the adjacent table.

What did the attendees have to say about the event?  Here are a few examples:

“Meeting my fellow Dice Influencers and the Gurus was the highlight of my trip.”

“Meeting you guys was priceless.”

“My hat’s off to ya’ll for putting on, yet again, a great event.”

“The best time in Vegas.”

“THANK YOU for everything y’all did to make this past weekend a truly memorable enlightening.”

“Not only was this a learning experience, but it was FUN too.”

That last endorsement sums it all up nicely. It was a great learning experience – and a heck of a lot of fun. So much fun that we did it again the following year, and the next year, and every year since.

Two years ago we moved the Crapsfest event to the weekend before Veteran’s Day in November.  As part of the event we now offer an opportunity for uniformed military and veterans to hook up with the seminar coaches for a special live casino session the Monday after the event weekend.

The next Crapsfest event will be the weekend of November 6th in Las Vegas, with our Veteran’s Craps Reveille Session scheduled for Monday morning, November 9th.  For more details contact Heavy at axispowercraps@gmail.com.