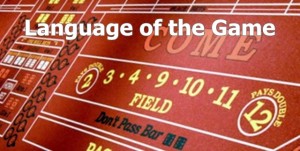 The first time you step up to a craps table you may feel like you have entered a foreign land – a place where people speak in a language that only they understand. And since language is a living thing that change and evolves over the years, no one person can ever teach you to be fluent in it. It’s something you have to live to really learn.

The stick person, the guy or gal who does most of the talking for the house, fulfills the roll of a carnival barker, hawking the high vig bets on the table. He calls for “hops, props, hardways, high-lows, yos, horns and worlds.” Then he pushes a selection of dice to the next shooter and says something like, “pick a pair and bounce ‘em off the alligator on the other end.” Tell the dealer you want to place the six and eight and he may respond “steak and eggs.”

There’s a tremendous amount of sexual innuendo at craps. Just look at the layout. There the Pass bet, the Don’t Pass, the Come and Don’t Come and the Hardway bets. Ask for a $1 hard six and he may give you “a bone on Viagra.” The stick person may even be nice enough to ask the ladies if they want up on a “hard ten, the lady’s friend.”

Imagine a new player stepping up to the game and wanting to shoot the dice. The stick person might push a selection of dice over to her and say something like this: Pick a pair and put them in the air and please hit the alligator on the other end. What did he just say, you ask? He told the player to pick up two dice and toss them against the diamond rubber on the wall at the end of the table.

There are literally thousands of one-liners like that used on the dice table. Some basic calls that are used over and over again and is universal to the game. On the other hand, some of the slang used only “works” in certain parts of the country. Highway 61 in Mississippi runs through the casino hubs at Tunica and Robinsonville. In casinos in that area a seven-out that rolls 6 – 1 becomes, “the highway that brought you here and the road that will take you home.”

Every combination of the dice has its own list of stick calls. Here are some of the more popular ones:

Two: Two craps, aces, snake eyes, two bad boys from Illinois.
Three: Three craps, ace-deuce, ace caught a deuce, the indicator (precursor to the eleven rolling), the Yo down under.
Four: Little Joe, Little Joe from Kokomo, the ballerina hit us in the tutu, ace- trey the country way.
Five: No-field five, thirty-two juice (after O.J.’s jersey number), Little Phoebe, fire, fever.
Six: Corner red, the national average, Sixie from Dixie.
Seven: Big Red, seven out, line away, front line winner, back line skinner, the Devil, Benny Blue, you’re all through.
Eight: The Eighter from Decatur, Ozzie and Harriet, the square pair, a couple of windows.
Nine: Center field nine, the center of the garden, Nine Nina from Pasadena, they shot Jesse James with a forty-five.
Ten: Big dick, the big one on the end, puppy paws, a pair of sunflowers.
Eleven: Yo ‘leven, yo lev, yo Levine the dancing queen, six-five, no jive.
Twelve: Twelve craps, boxcars, midnight, all the spots we got, outstanding in your field.

But the slang of the game goes way beyond calling the numbers. If the dice are thrown too high and land in the chip rail you may here, “In the wood is no good,” or “Too high to qualify.” If the dice hop over the rail and land on the floor you may here the call, “Hip hop, it’s over the top,” “Die down outside,” or “We got an O.J. – two die down outside.”

Action: The total of all your wagers in play.
Apron: The outside perimeter of the table layout.
Back Line: Another term for the Don’t Pass line.
Barber Pole: A stack of chips of different denominations.
Bowl: Also known as the “boat,” this is the bowl in front of the stickman where dice are stored when not in use.
Box Numbers: Numbers that can be established as a point or place bet.
Boxman: The lowest level of management in the craps pit, this is the tables supervisor who sits between the dealers and guards the tables bankroll.
Boys: The dealers.
Break in: New dealers.
Buffalo: A prop bet on the hardways plus and any seven.
Buffalo Crap: A prop bet on the hardways plus any craps.
Call Bet: Verbal bets made without the use of chips.
Capping: Illegally adding chips to the top of an original bet after the decision has been made.
Choppy: A table that is neither hot nor cold.
Cocked dice: A die or dice that end up leaning against a wall, chip or other object on the table.
Color up: Exchanging smaller denomination chips for larger denomination chips at the end of a session.
Comp: A complimentary service provided to the player in exchange for the player’s gaming action.
Coolers: Cold dice switched into the game to end a hot streak.
Crossroader: A casino cheat.
Dime: Casino slang for two $5 chips.
Down: Instructions to the dealer to return your bets to you.
Downtown Odds: Better odds on may of the prop bets offered by Downtown Las Vegas casinos as an enticement to get more players to gamble there.
Duke or Duker: Big money or a big money player.
Eye in the sky: Surveillance video or live monitoring of the game.
Fade: To cover a shooter’s bet in a private craps game.
Fill: To replenish the table’s supply of chips.
Floorman: A casino employee who works the pit, oversees several tables, tracks players betting levels and authorizes player credit and comps.
Front money: Money deposited in advance at the casino cage that the player intends to draw markers against. Front money is used instead of casino credit.
Garden: Slang for the Field.
George: A player who consistently tokes or tips the dealers.
Green: Slang for $25 casino chips.
Gutted: Losing all of your bankroll within minutes of buying in.
Hand-in: A dealer toke or tip handed in to be dropped in the tip box as opposed to being wagered for the boys.
Hands! A warning shouted by both players and dealers advising other players and late bettors that the dice are out and their hands should be up and out of the way of the dice.
Hedge: A combination of two or more wagers made in an attempt to insure one or the other and reduce the possibility of loss.
High Roller: A bettor who wagers large sums of money.
Hit a brick: A stickman call when the dice hit a stack of gaming chips or some other object on the table.
Hook: The player position at the curved end of the table.
Hop bet: A one roll wager on a specific combination of the dice.
Inside numbers: On the craps layout, the 5, 6, 8, and 9 box numbers. Note that the 5 and 9 can also be “outside” numbers when placed with the 4 and 10.
Juice: Vigorish or commission paid on certain wagers.
Lammer: Plastic coin-like markers that are placed on Buy and Lay bets. There are also On and Off lammers used to indicate whether or not a bet is “working.”
Lights out: A stickman call to remind dealers that a decision was made on the last pass, and they are to move the On/Off button (puck) to the Off position.
Lock it up: Dealer jargon for picking up a l oose gaming chip.
Lump: Slang for a dealer who has trouble servicing heavy table action.
Marker: A counter-check used to draw funds against an established line of casino credit.
Midnight: A one-roll proposition wager on the twelve craps.
Nickle: Slang for a $5 gaming chip.
Put Bet: A wager on the pass line made AFTER the point has been established.
Quarter: Slang for a $25 gaming chip.
Shill: A casino employee who plays house money by specific rules to help start a game. Also known as a starter.
Sleeper: A bet that continues to parlay up because the owner of the bet has left the table or is not paying attention.
Stiff: A player who never tokes or tips the dealers.
Stroker: A player who hustles bets at the table or makes it difficult for the dealers to service the table by picking up other players winnings.
Tapping in: A dealer returning from break taps the stickman on the shoulder and takes over at stick, while the stickman rotates to one of the dealer positions and another dealer goes on break.
Tub: A mini-craps table.
Two-way wager: A multi-unit bet made for the player and the dealer.
Whip shot: a toss utilized by dice mechanics to keep the dice spinning on a vertical axis without turning over.